Audi promotes alternative energies at the WCGC Portugal in Estoril

The home team won the net standings and the sponsor’s squad was the best in gross. 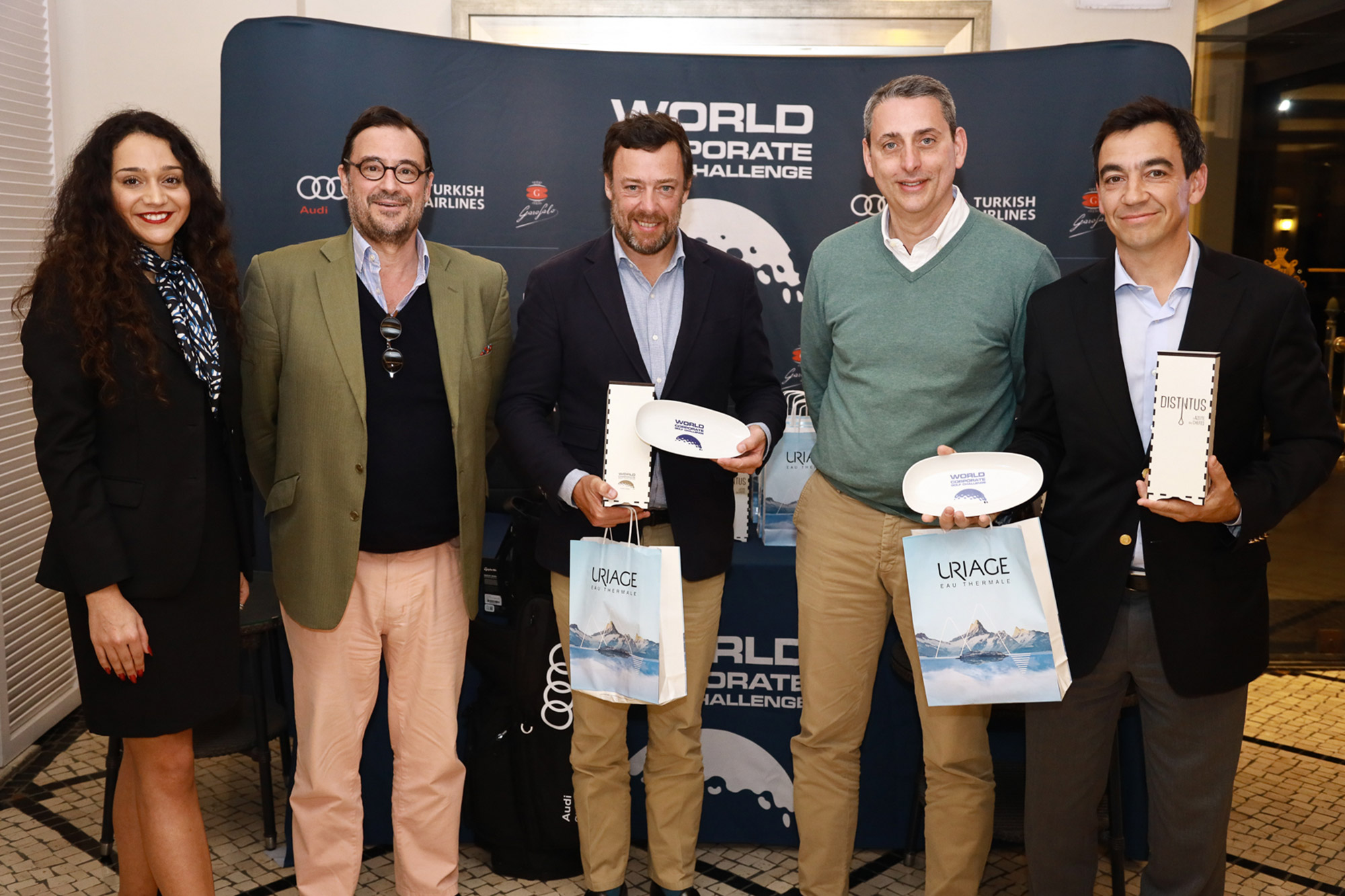 The wind, sometimes very strong, at Club Golf Estoril reminded us why Portugal has been at the world vanguard of renewable energies and Audi took advantage of the third Portuguese stage of the World Corporate Golf Challenge (WCGC) 2020 to promote its E-Tron model.

In times of climate changes, the Audi “full-size” SUV combines a sporty style with versatility for everyday use, using two electric motors, as well as an electric all-wheel drive.

«This year we reinforced our commitment to golf, because we are promoting the electric and hybrid models, related to nature. Golf is the most suitable for this association», said Alberto Godinho, the general manager of Audi in Portugal.

Alberto Godinho, himself a golfer, played the tournament, but admits that things «did not go particularly well, especially in the front nine. The back nine was a little better».

However, Audi did not leave with empty hands of the iconic course that staged several ‘Open de Portugal’ editions.

After all, it was the 3rd Team of Audi that won the gross standings, with 56 points. Therefore, Audi qualified to the National Final, scheduled for May the 30th and 31st, at Montado Hotel & Golf Resort, in Palmela .

The perfect association for the event and the sponsor was reinforced by the names of Audi Players: Miguel Franco de Sousa (31 points), the president of the Portuguese Golf Federation, and Manuel Quinta (25 points), the golf manager of the ‘The Automobile Club of Portugal’.

«It is always positive when our own team wins. We are all competitive and this way we are sure of having an Audi team in the National Final», stated Alberto Godinho.

«Audi launched us the challenge of playing in this event, which has the particularity of being promoted by a great friend of mine (Pedro Castelo Branco, general manager of Golftattoo Eventos). And it is also great to play on behalf of a Portuguese Golf Federation sponsor, one who has been very supportive of the national golf», said Miguel Franco de Sousa.

When the WCGC in Portugal 2020 season reaches its halfway mark, this was undoubtedly the tournament with the most tough playing conditions and Miguel Franco de Sousa, who played with an average 2.0 handicap, is the perfect one to explain what it was like to be on the course.

«It was a very good day, with quality play, as we won the gross, in a course that was exceptionally challenging today. I really enjoy the Estoril Golf course, it is very demanding one from a technical point of view and today it was very, very strong windy, which forced us to play a different kind of golf, but I have fun playing in this kind of golf», said the president of the Portuguese Golf Federation, who, in his days as an amateur, played for Oitavos Dunes, where the wind also blows constantly.

Knowing how to deal with the elements was also a decisive factor for the title in an event where the champion is the best team in the net standings.

It is not surprising that the home team of Club Golf Estoril was crowned champion with 61 points, to which contributed 35 points from Júlio Figueiredo and 26 from Pedro Palmares.

«We had the advantage of playing home. That was our secret. I play there often, about three to four times a week. From May or June the course is windy and becomes completely different. The greens get tougher. Today the greens were slower, which made them more accessible, because when they are at normal speed … with the wind, they get very tough. Today we played almost always with the wind against, which is more tiring and demanding. In windy conditions the most important thing is not to fail. It is essential not to think about the distance and only think about putting the ball on the fairway, even if it costs some distance», explained Júlio Figueiredo.

With an average handicap of 5.0, Júlio Figueiredo admitted that this was the desired result: «The goal is always to win. And now, in the National Final, we shall be there to win».

In addition to the net and gross winners, seven more teams qualified for the Montado through the net standings:

For the third consecutive tournament in 2020 there was a full house of 36 teams and 72 players.

Another successful journey that pleased Audi’s Alberto Godinho: «This partnership makes a perfect sense for a brand that has been supporting golf in Portugal for a long time. In the case of WCGC this is our third edition and its corporate atmosphere is extremely important to us. It is a partnership that will keep going».